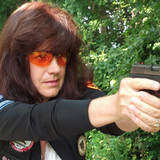 “Forensics for Sisters in Crime”

Mike Medler — recently retired Indianapolis-Marion County Forensics Services Agency director, long-time Indiana State Police officer, and forensic expert — will discuss one of his most riveting murder investigations, one that tested even his expertise with the principles of forensic sciences. Presented as a “who dunnit,” Mike’s program promises to confound even the keenest, most twisted imaginations among the Speed City Sisters in Crime members. Prepare to squirm.
As Mike describes the case … in early 1979, along a remote county road in rural Wells County, a farmer discovered the nude and disfigured body of a female. The nearest farm residence was over two miles away, and the fields surrounding the body were yet to be planted with corn and soybeans for the summer. The Wells County Sheriff’s Department and the coroner called in the Indiana State Police to work the crime scene, as well as attend the body’s post-mortem examination. Forensics broke this case open, but a local optometrist played a key role, too. ... More to come!

Mike Medler began his law enforcement career in 1976 as an Indiana State Police Trooper. Over the next 29 years — rising from trooper, to first sergeant, to lieutenant, to major, to lieutenant colonel — he:
In 2005, he retired from the Indiana State Police and was appointed laboratory director for the Indianapolis-Marion County Forensic Services Agency. He retired in February after serving more than 12 years.

Mike earned his BA in political science/pre-law from Wabash College, simultaneously attended the University of Virginia and the FBI National Academy, and completed numerous forensic, investigative and management/leadership programs. His professional memberships include: American Society of Crime Laboratory Directors, Board of Visitors in the Investigative and Forensic Sciences program at IUPUI, Advisory Board at Harrison College, and Domestic Violence Fatality Review Team for Marion County. He also is a past board member of the Domestic Violence Network in Indianapolis.
July 28, 2018
DIANNE DRAKE 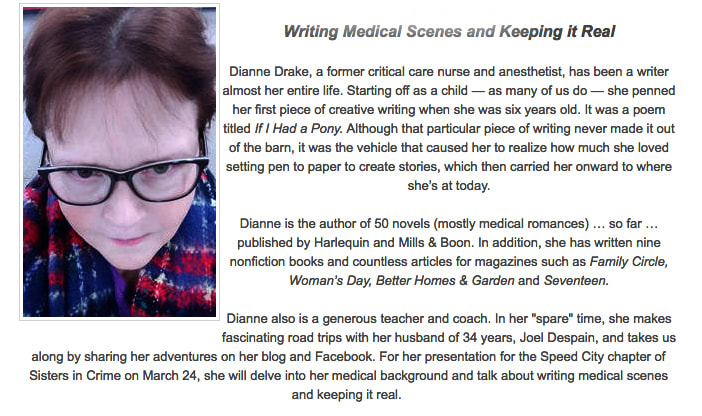 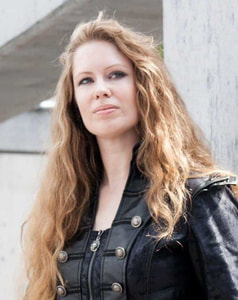 “Social Media for Writers”
​
Discoverability, branding, and marketing are critical to the success of a traditionally published or self-published author, but there is still a startling amount of unhelpful or just plain wrong information being shared.

Laura VanArendonk Baugh will discuss technical aspects of branding and marketing, with walk-throughs for setting up and maintaining an author website (including caveats for common mistakes and dangerous pitfalls for the novice) and tutorials for some of the scariest bits of marketing (learn to love the camera!).

Laura was born at a very early age and never looked back. She overcame her childhood deficiencies of having been born without teeth and unable to walk, and by the time she matured into a recognizable adult she had become a behavior analyst, an internationally-recognized animal trainer, a costumer/cosplayer, a chocolate addict, and of course a writer. Now she is an award-winning writer of speculative fiction, mystery, and non-fiction. Her works have earned numerous accolades, including 3-star (the highest possible) ratings on Tangent‘s “Recommended Reading” list. She admits a mental turning point in her career when she realized she could buy that sexy red Tesla with income from her books!

For more information about Laura, her books, and her blog, visit lauravanarendonkbaugh.com/. 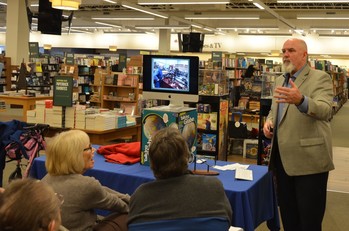 October 27, 2018
JOE JANSEN
Writer and Marine Corps veteran living in central Indiana
“Creative Research Techniques”
​
Joe is currently working on a nonfiction book about Hoosier frontiersman John Small, who fought in the Revolutionary War and later served as sheriff of Knox County. Small is the designer of the Grouseland rifle, which he made about 10 years before Indiana became a state. That rifle was designed as the “official state rifle” by Indiana lawmakers in 2012.

Joe will talk about some of his interesting adventures experienced while he was researching John Small’s life.

For more information about Joe, visit his blog at http://joejansen.blogspot.com/.
During her presentation for Speed City Sisters in Crime, Paula will discuss the types and purposes of various firearms, their proper handling, safety precautions, and what to expect and how to react when firearms are drawn. She will demonstrate how to look down the sights, rack the slide, cock or de-cock, and tell whether a weapon is loaded or unloaded. She will provide the audience with non-usable replicas for a hands-on experience.

Paula invites members to bring two minutes of their best “pistol-packin’ prose” to share aloud
during the program. She will follow each reading with a critique, informing the writer whether their prose
was on target or where they missed their mark.

Paula has more than 35 years’ experience with firearms. She is an NRA Range Safety Officer, as well as a 4-H and Indiana Department of Natural Resources Hunter Education Instructor. Check out her website at www. safeshotz.com and her Facebook page, www.facebook.com/safeshotz, where you will find all kinds of safety-related topics. 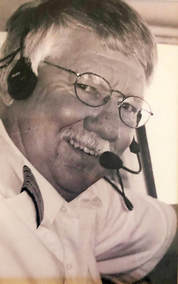 It’s unlikely Rick’s ever had to deal with “snakes on a plane,” but he has dealt with a disgruntled, handcuffed prisoner and his police escort, as well as a passenger who took her last breath at 30,000 feet.

Rick has many page-turner stories to share, so please be sure to join us for our November program, this month on the third Saturday, the 17th. And when you do, be sure your seat backs are upright and your seat belts securely fastened. … And whatever you do, don’t call him Shirley.